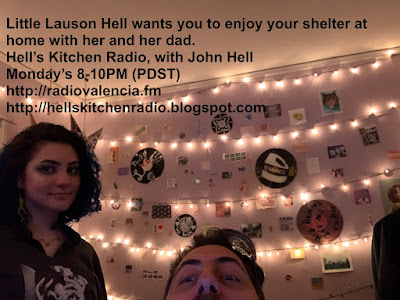 I have a household which consists of my wonderful and supportive bride, Saucy Hell, our two year old son Bodhi Hell, and my 15 year old daughter from my first marriage, and the one you have come to know through her many visits to Hell's Kitchen Radio, Little Lauson Hell. Lauson has been on my show at least a dozen times now, starting when she was seven years old. The links to all of her visits are at the bottom of this post.

We've been home almost six weeks now, and I've been asking her to come back on the air with me for a while. She finally acquiesced and we broadcast last Monday night from her own room! And it was clean! It's actually the cleanest I've seen it in a few years. See, there is an upside to the shelter at home thing.

And for this show it was also 4-20. I really thought hard if I was going to play a bunch of pro-dope smoking songs. What kind of message would I be sending my daughter if her father was playing a bunch of Snoop Dogg and Cypress Hill? Not the best message, I agree. So I played Cheech and Chong instead! HA!

There are a few pro-cannabis songs in the mix, but I ain't no prude. Just because I support the use of the all-natural leaf doesn't mean I use it. And I certainly do not condone my underage child using it. She is well aware of that. But the music is just too good not to share.

Lauson had some great choices in there as well, and as usual a few a bit more mainstream than I would play. But who cares! It's my show, and Little Lauson Hell can play whatever she chooses, as long as it isn't misogynistic or pro-drugs. Oops.

I stuck around following my show for two hours and played seven tunes. That was fun. I don't have that posted here. You can go on the Radio Valencia Time Machine and hear it though. It starts up at the 4:48 mark. Here's the second hour.

It's My Life: The Animals - L
Kaya: Bob Marley and the Wailers
Doin' Time: Sublime - L