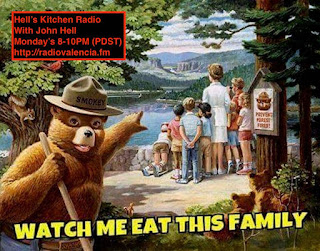 It's a total shock to have any idea where or when any of my shows may or may not be listened to, if at all! I say this, because it hit me a long while back that since you can download these shows, it's always possible, albeit a slim shot, that you are listening to this show in the far distant future on some media player, deep on the outskirts of a space system, having never even stepped foot on Earth. You've only heard passing mention of this long-dead orb. And what you've heard are meager little bits of nonesuch info that has honestly left you responding "meh". And who can really blame you?

This planet has had its ups and downs, but it's the only planet we have at this time. So you can float there all smug in the Aldebaran system with your flying everything, and ability to beam everything and anything anywhere at any time, but for me and my friends and family in July of 2017 we'll keep on fighting the good fight, making love, rocking out, and flying like an eagle, thank you very much. 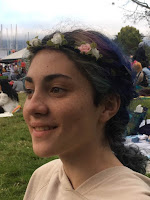 Little Lauson Hell joined me on the air this past Monday, for what was her 9th visit to the Radio Valencia studios. Below I link to her previous shows. It's a trip watching her grow up on the radio. I remember how shy she was the first time she was with me. I think she was maybe 7 years old. I always say about that first episode "she was shy until she was no longer shy". Lauson didn't bring much music to the show on this night, but we spoke about her recently completing 7th grade, her fun-filled summer, and her goals for 8th grade. She's got wit, I'll give her that.

Once again I streamed video via FB Live. Thanks for all who tuned in. I honestly don't see what's so fascinating about watching a DJ cue up records, but knock yourself out. My buddy, and musical realization of a childhood dream I had all gone to pot, Adam Mackintosh tuned in and gave me permission to play his recent cover of the pat mAcdonald classic "Future's So Bright". If you recall the Timbuk 3 tune, then you really do need to listen to this latest version, which is about to make it onto a huge 100 song compilation at tribute to Pat. Brilliant!

Adam also introduced me to singer Liv Mueller last week via the Marco Polo app. Have you seen this app? What a voice she has! WOW! Deep, dark and sultry. You can find her release "Liv Sings Light of the Valley, Shadow of the Mountain" on iTunes.

I guess in my weird, subversive sort of way, much of the music on Monday night was somehow or another related to 'merica.

Little Lauson Hell's many visits to Hell's Kitchen:First show in 2012Second show in 2014Third show also in 2014Fourth show in spring of 2015Fifth show in the summer of 2015Sixth show in summer 2016 along with Saucy!Seventh show was also during summer 2016
Eight show was December 2016

Fairly Local: Twenty One Pilots
What Do You Want From Life?: The Tubes
Hillbilly Math: Dale Crover

I Live For Cars and Girls: The Dictators
Work It: Missy Elliot
The Falcon Has Landed: Fu Manchu

I'm So Bored With the USA: The Clash

And because you so desperately want to relive the 80s in fine fashion, I give you Timbuk 3.