I co-founded Radio Free Burning Man in 1994. I was the program director there until 1998. What an amazing five years it was. More on that later. Gordon Burke, another co-founder, and chief engineer (he owns all the stuff, you know what I mean?) along with his brother made this short .wmv animated vid showing the layout of the station.

It's a short two minute video.

Click here to see it.
Posted by John Hell at 9:33 AM No comments: 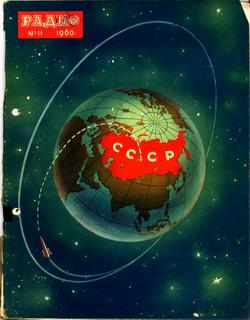 Comrads, do yourself the favor and visit this site full of a fine collection of Soviet era Propaganda posters. I am seriously blown away by this. I wish I could speak Russian.

Propaganda Images From Soviet Magazines
Posted by John Hell at 11:58 AM No comments:

Give me a break

So, I received my BA in Media Literacy. I had been in radio for about 13 years when I went back to school to get a degree. I attended SFSU, a great school for a radio broadcasting degree, and I figured I would earn mine and go about my life being a button monkey for a commercial radio station.

The problem is, there is no way I would ever work for a commercial radio station again.

My radio career began when I was five years old. I didn't actually have a show on any top forty station, I have, I and never will again. No, instead, I sat in front of my fathers' stereo speakers with an old cassette recorder, and front and back announced music on the turntable. I dreamed of the day when I would host a rock and roll radio show. This was back in the early 1970s.

It wasn't until I was 18 years old that I had a chance to get behind the mic at a radio station. KFJC down in Los Altos Hills, CA. It was at this radio station that I learned the true meaning of radio as a medium of the working man. More on that later.

I've had jobs all over the music industry from the time I was 16 years old. I've been a mobile DJ, I've DJ'd at an ice skating rink, I was promotions director for a small record label, I was in bands, I've worked the retail end of music, you name it, I've done it. It was radio however, that my heart belonged to.

I stayed at KFJC from 1988 until 1997 when I got married and moved to San Franciso. Besides getting married, I also began attending San Francisco State University. I had taken a few years off of school, and after a very short stint living in the Virgin Islands (I went there to do radio, of course, but ended up coming home broke, yet tan, and desireing to go back to school), I ended up back in the bay area.

I figured I would take some broadcasting courses at SFSU for a while and then decide what my emphasis would be. I still wanted to be a DJ, but by this time it had to be at a non-commercial radio station. I interned at KRQR ("The Rocker") in the late 80's, and found the world of commercial radio to be too limited. They tell you exactly what to play and when, and just about exactly what to say and when. No thanks.

I thought that once I had my degree in my hand it would be a piece of cake to find my dream radio job, and make a living at it. How amazingly wrong I was. You see, the problem with a career in commercial radio, is, no matter how much education and non-commercial experience you have, you must still begin at the bottom of the latter. This is rediculous. I walked into interviews wanting a management position; I was flat out refused. I was told the same thing over and over again: sorry, but you have to start at the bottom. Don't get me started on the Telcom Act of 1996, thank you Bill Clinton. This act paved the way for consolidation and then lay-offs. Eight stations in one building, one management staff is alll that is needed.

After a one year stint as a button monkey at Alice FM in San Francisco, I was told that the person I was filling in for was coming back from maternity leave. I didn't even know I was filling in for anyone. I thanked the PD for showing me the error in my ways and departed. The error I made, was assuming that commercial radio had a place for an open minded, friendly, career oriented, group working individual that I am.

I decided then and there, that I will never attempt a job in commercial radio again.

My next radio endeavour was in the world of micro/pirate radio. I had already co-founded Radio Free Burning Man, in 1994. Click here to see the station site. I programmed that station with a growing staff for five years. I ended up at San Francisco Liberation Radio.
Posted by John Hell at 9:05 PM No comments:

and the time is right...

http://tofuhaus.antville.org/
Posted by John Hell at 11:49 AM No comments: