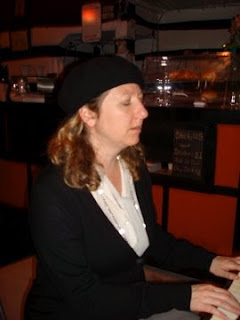 Tonight on the show, Jen Burke Anderson (http://myspace.com/jenburkeanderson) joined me in the studio. Jen is an old friend from my KFJC days. She's a fabulous writer, and was kind enough to read some excellent pieces for us. I love the fundamentalist church piece. Tent revivals should always be this fun.

After the show I went over to 12 Galaxies to check out the last show of the season for Ask Dr. Hal. I was very tempted to walk up on stage and carry Chicken off. But, I figured it was the last show, he might as well enjoy himself while it lasts. It is a very good show... at times.

for some reason it appears that only the first two hours were archived. All of my interview with Miss Anderson is there, but you miss some brilliant musical selections, as well as an amazing rant against the suburbs. What the hell do they have that's so good, anyway? It's always the best shows that don't get recorded. Oh well, one for the ages, I guess. I think the podcast ends with Boris. Yes, yes it does.

Next week on a Season in Hell, the B.ay A.rea D.erby Girls (BAD Girls, get it) will be on the show, as well as Ragi the Lawyer.

I Love Livin in the City: Danko Jones
She Watch Channel Zero: Public Enemy
The Elephant is Dead: Bill Hicks

Everyday I Love You Less and Less: Kaiser Chiefs
I Have Tasted the Fire Inside Your Mouth: Nadja
Posted by John Hell at 7:41 PM No comments:

A Season in Hell #31: Roller Derby-a-gogo, or a funny thing happened on the way to the show

So, it would appear that the Pirate Cat Radio internet and FM signal were down even before I came to the station tonight. I won't get into the details, because I would end up airing dirty laundry, which really has no place on this here blog of mine. But, suffice it to say, I attempted to get us back on the air, to no avail.

Coincidentally, I received a phone call from Chicken John, while I was waiting to see if we were going to be back on the air (the whole time I have my guest, Miss Frisky Kitten of B.ay A.rea D.erby Girls, waiting to be interviewed). He was calling me to ask if I could fill in for him as host of the Ask Dr. Hal Show at 12 Galaxies tonight. Very unusual considering I'm regularly attending to my own show during this time. It became obvious within the next 15 minutes that I would not be doing my radio show, so I phoned him saying I would be pleased to do it.

I consider myself to be Joan Rivers to Chicken's Johnny Carson. I've filled in for him about 10 or so times over the last seven years. I do not do a Chicken John impersonation. I do me. I got some cudos from the crowd, but mostly it was just entertaining as hell watching Rose and Spy do their Mouse Trap dance. The Mouse trap boys did a dance all their own. I got the video to prove it.

I did give Pete Goldie a hard time. That's always fun. Josh the Orange Box Man did a stupid joke. KROB pleased us with his dulcent tones, David Cappuro flashed us, in time, with many a visual treat. There was no Frank Chu, which is hard to believe. And of course, Hal was truly remarkable in his snare drum tight delivery. That guy can answer anything. I was quite liberal with the Fernet Branca. You've had some, haven't you? I like what Katie said about it: "it tastes like minty butt." Hmm... OK Then.

DJ icecreamlopez was manning the merch table for the Life-Sized Mouse Trap. She is one cute counter girl. All in all a fine night indeed.

I got in a great discussion with Mark Perez, the creator of the Mouse Trap, about the lack of "new blood", participating in the SF scene. I hypothesized that the newer folks in town are not aware of the rich body of work that has taken place by so many in recent years. They don't know where their own place is. Mark told me that I must write a book about the last 15 years in SF. There is so much to say. Who would I interview? How would I focus it? Who would read it?

It's almost 1am, and I work tomorrow. Thanks for reading. All comments are welcome, unless they're about World of Warcraft, or some other shit like that. Good night to all the strip teasing mice out there.
Posted by John Hell at 8:02 PM No comments: 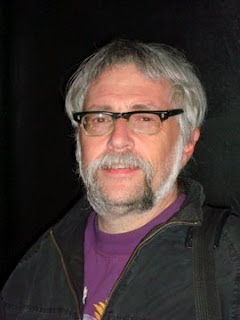 Tonight on the show, I, once again, invited Ragi the Lawyer to come down. He has been on four times in the last six weeks. He came down last week, when I stayed home, sick. Thanks Ragi. Anyway, he came in tonight to talk about renter's rights; especially in case of a fire. We actually took one call. Good for him!

Katy Bell came by, celebrating her birthday. Happy Birthday Katy! We had a KROB moment and then she was off again. If you've been to the Power Tool Drag Races, you know Katy as our Flag Girl. She also produced the Mark Growden benefit, which I MCd just over a week ago.

I've really been keen on this new format idea. The first hour is an interview, the second
is new music, the third is specialty genres, the fourth will toss you into dreamland, either calmly and sweetly, or kicking a screaming. You be the judge. I'd like your suggestions about music and genres for the third and fourth hours.

I love hosting a four hour show. Two hours is not nearly enough. I've been in radio for 20 years now, and I look at it as an art form. Taking two or more sources of sound and mixing them together, either end to end, or throughout; it's the art of the segue.

Go here to download the show. I'm very pleased with the set starting with Sonic Reducer, by Rocket from the Tombs. Tell me what you think.

Give Me Wine or Money: The Mekons
Bukowski: Modest Mouse
Time Has Told Me: Nick Drake