Stream another fine year, HERE!
Download your youth, HERE!
Listen into all my shows here, or just scroll down

Way way back in 2011 I had this desire to feature 1971 on my show. What a great year that was for music. This was when bands like Led Zeppelin and the Rolling Stones were still considered young and relevant. Following this show I made an executive decision to annually feature another great year during the month of November. Preparing for this year's show I was eager to share a more recent year with you. 2006 stood out to me even while we were deep in it. Taking a look at the playlist below I think you'll agree.

I didn't get to nearly all the artists and tracks I wanted to play during my sixth annual ANNUAL ANNUAL, but this here is smattering of the genius that was 2006.

Freya: The Sword
Beyond the Horizon: Bob Dylan
You Don't Know Me: Willie Nelson
Laugh/Love/Fuck: The Coup

A History of Drunks: The Melvins
Make Them Suffer: Cannibal Corpse
It Is Us: Mudhoney
Backstage Girl: DJ Shadow

What Keeps Mankind Alive: Tom Waits
If Looks Could Kill: Camera Obscura
Wherever You Go: Built To Spill
Mr. Tough: Yo La Tengo

One band that didn't make it onto the show this year was Texas' own Midlake. Their sophomore effort "The Trials of Van Occupanther" was a real winner in the Hell household starting in 2006. It still gets a lot of play during road trips. Below is the video for "Roscoe". 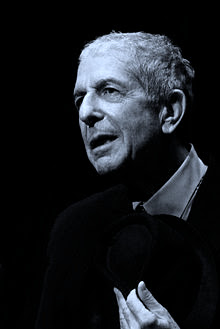 Stream the Tribute, HERE!
Download the Memories, HERE!
Listen into all my shows here, or just scroll down

Guitarist and singer/songwriter Eric McFadden and his Queen delphine joined me in the studio Monday night to pay tribute to two greats of the music world who recently passed on to the great beyond.

While I was never a big fan of the way Leonard Cohen phrased his own tunes, I was a huge fan of the many covers of his classics. I believe I first was turned onto the brilliant songwriting of Mr. Cohen through the Joe Cocker Mad Dogs and Englishmen version of "Bird on a Wire". I was hooked from that moment on the storytelling and eagerly sought out other covers. Easily my favorite cover of his was "Hallelujah" by the late, great Jeff Buckley. "I'm Your Fan" is a great tribute record to Cohen, which was released in 1991, featuring REM, Nick Cave, The Pixies, and John Cale. Check it out!

Leonard Cohen died November 7th of cancer at the age of 82. I appreciate that he was buried in a simple Jewish ceremony next to his parents in Montreal. 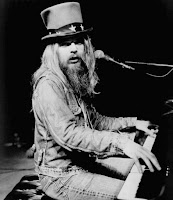 The piano player on the Mad Dogs record was none other than my other featured player for the night: Leon Russell. Russell's stride piano playing and exaggerated vocal style helped him stand out from others during his high profile era of the 1970s. Starting with the Mad Dogs record I spent many hours enjoying his early 70s solo efforts. Though he wasn't as often covered as much as Cohen, Russell made a profound impact on many songwriters that followed him. His birthplace, Tulsa, Oklahoma, named a street after him in 2010. He died this past Sunday after a few years of failing health. He was 74.

Listening to music is supposed to be a joy. Even when the artist we love and respect has passed to the great beyond we have their songs to carry us through to our own old age. I've told my friends and family if I ever get to a point where they have to prop me up in a corner just place some headphones on me and place my iPod on shuffle. Losing Cohen and Russell is indeed sad, but it also will lead to a renaissance of their music. Perhaps your favorite band will cover their songs. Maybe, like after Jerry Garcia died, there will be a huge outpouring of new versions of some of their deeper album cuts that you never knew they wrote. From loss comes inspiration. Through grief comes resilience and vision.

At this writing Mose Allison has passed away at the age of 89. I can't host enough shows to pay tribute to all the musical greats who we have lost this somber year.

Take heart my friends, and hold each other closer. We're going to need all the good love and strength we can muster.

Eric and delphine are performing the next two Fridays and Saturdays for Dark Kabaret at the Great Star Theater in China Town. Tickets and information here.

Chelsea Hotel No 2: Lana Del Rey
A Song for You: Donny Hathaway
Everybody Knows: Leonard Cohen
Who By Fire: Coil

Avalanche: Nick Cave and the Bad Seeds
Alcatraz: Nazareth
Back to the Island: Toots and the Maytals
First We Take Manhattan: REM

As I said above the Joe Cocker Mad Dog and Englishmen tour and record made a profound impact on me as a youth. Luckily for us YouTube has much of the film to share. Below features a rather fun version of Space Captain. Sing along with all the "oohs" and "ahs".

Hell's Kitchen Radio #280: Getting Rid of this Clown Act 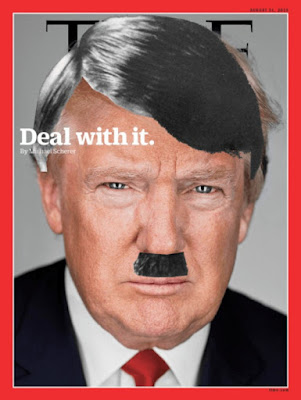 Stream the Fear, HERE!
Download the Future, HERE!
Listen into all my shows here, or just scroll down

Well....shit. Not really certain what to say. Monday's show featured an interview with a great group of fellas from the band Savage People, promotion this Sunday's first ever SF Punk-Metal Flea Market at the DNA Lounge, 375 11th Street, SF, 1-8PM. It's free and there are some great vendors scheduled to table the event. You really have to attend. More info here. See you there. I'll have my 12 year old daughter in tow.

The rest of the show was all about the election. You remember the election? It was Tuesday? It was fucking shit. You remember that? Do you remember your dreams? You remember those, right? You remember believing in all of those polls that Nate Silver told us to believe in? I wonder how well he's going to be sleeping from here on out. Truth be told, I truly do not think that Drumpf wants to, nor believes he ever would be elected President. I'm not joking. I really feel that he did everything in his power NOT to be elected. What does that tell you about Clinton and the DNC?

And would Bernie have actually been elected? Who knows.

Here's what I posted on my Facebook wall this morning:

"I want to reevaluate how I'm going to approach the next four years. I want to pay more attention to the things that I love, and the things that I have the power to improve. I want to recommit to the people that I love. I want to hold you all close, closer than ever before. I want to find the beauty in everything, including Trump. I want the best for all of us, while still fighting for what I believe to be the path towards truth. I refuse to live in denial, but I also refuse to wallow in misery, self-doubt, and blaming. I want you there with me. I love you all."

Below is my playlist for election night. It tells a story. See if you can figure out the moral.

In The Flesh: Pink Floyd
Blowfly for President: Blowfly

Pariah: Savage People
Ignorance is Bliss: Ramones
Do They Owe Us A Living: Crass
Politician: Cream

Eminence Front: The Who