A Season in Hell #173: My Own Personal Torment 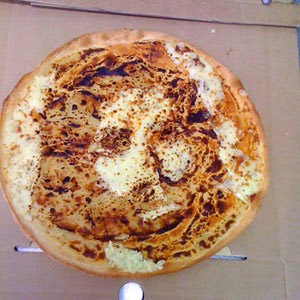 I have a very large music collection. Too large some might say. But I'm a DJ, so shut up. Anyway, a lot of people give me CDs, asking them to play their band. I don't keep those, usually. Mostly, those go to the radio station. Others give me mix CDs, saying that I'll just love their mix. I often re-gift those. Often, but not always, and NEVER from my dear friend, and brother-from-another-mother, Mikl Em. His mixes are always thoughtful and irreverent. Yes, I know what that word means. Like I said, brother-from-another-mother.

As I was considering what to play for tonight's show, I found a mix CD he made for me a few years back, titled "Songs about God". I gave it a listen a realized, HEY, I can make a show out of this. I have lots of music about God. Not all of these songs are the most respectful, but then again my name is John Hell.

So tonight I bring you my own personal torment. I think you'll enjoy it. it was fun to put together.

Jesus Walking on Water: Violent Femmes
I Saw the Light: The The
They Ain't Making Jews Like Jesus Anymore: Kinky Friedman
Christ for President: Billy Bragg and Wilco
Everybody Wants to go to Heaven: Love and Rockets

The Insect God: Monks of Doom
Presence of the Lord: Blind Faith
So It Is Written: Savage Republic
Your Own Personal Jesus: Johnny Cash

Touch My Evil: Lydia Lunch
Not of this God: Slayer
I Saw the Light: Hank Williams

The Rodeo: Gary Lee and the Showdown
Posted by John Hell at 10:30 PM No comments:

I said it once, I've said it 7000 times, I have a very large. And there're some days when I just sort of feel like playing a whole bunch of different stuff on the show. Some weeks it's jazz, so weeks it's blues, some weeks it hard rock and metal, But tonight it's just sort of all over the place. So forgive me for not seeming to have any type of focus tonight, but I think you'll agree with me by the end of this two-hour piece of artwork that yes, yes indeed, this truly is a delectable piece of art.

The Donut Shop: Down in Front
Winter's Wolves: The Sword
Storm Reefer: Dopethrone