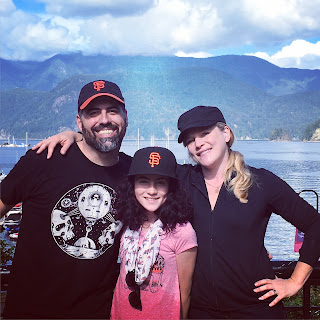 Stream The Family Business, HERE!
Download Our Dirty Laundry, HERE!
Listen into all my shows here, or just scroll down

It's been WEEKS since I've hosted a show. Here's my most recent one, which featured both the wife (Saucy) and the daughter (Little Lauson Hell)! I think this is the first time I've had them both in the studio with me at the same time!!!

It's a family affair tonight! I've got the return of Little Lauson Hell and my dear bride, Saucy in the studio with me. Will we air dirty laundry live on the radio? Lauson and Saucy chose much of the music. It's a wee more poppy than you'll usually hear in the Kitchen. Don't let that stop you from enjoying it. And the banter is...woo hoo! Boy, do you get to learn about this family! Yowza!

Sorry it's taken so long to post this. I took a few weeks off, and traveled to the great Pacific Northwest. We tried to fly to Vancouver, but wouldn't you know it, them Canadiens say we need to have a passport for the little one to fly up there. So we flew to Seattle, drove to Vancouver, then drove back to Seattle, before ending our 9 days in Portland. Fabulousness was had by all!

I'll be back on Radio Valencia this coming Monday night at 8PM (PDST). Tune in.

Locked Out Of Heaven: Bruno Mars
Get It Together: Beastie Boys
Gravel Pit: Wu Tang Clan

Somebody That I Used To Know: Gotye
Pretty Bird: Jenny Lewis
Let It Down: Magnetic Zeros

Dropping Some Coin: The Reliables
May This Be Love: Emmylou Harris
Way Down In The Hole: MIA/Blaqstarr

Come Get It, Bae: Pharrell Williams
Posted by John Hell at 10:54 PM


Have I told you what a beautiful family you are? If I haven't mentioned it, I am a HUGE fan from the Sierra foothills, and think a lot of you - about all three of you - smart, funny and very pretty (you too JohnHell)! Merry Christmas, Happy Hanukkah! & Happy New Year!