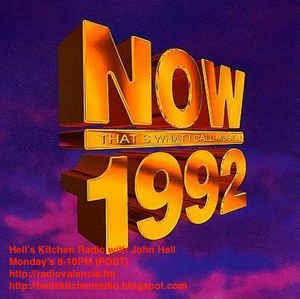 the Death of Indie Rock, HERE!

It's that time once again when I get to indulge my inner Dave Morey and focus my show on one special year. This is my seventh annual Annual Annual, and this year it's all about 1992. I turned 22 in late September and was deeply involved at KFJC as well as attending countless live shows around the Bay Area.

The club scene was really good to me too. South Bay spots like Marsugi's and One Step Beyond were regular hot spots for us KFJC folks. I also spent a lot time at The Stone in SF, Paradise Lounge, Above Broadway, Slims, um, er, my brain is hurting trying to remember all the places. I recall The Omni, 924 Gillman Street, Berkeley Square, and Freight and Salvage in the East Bay too. And of course many many Grateful Dead shows up and down the west coast. 1992 was a really fun year for me.

As for the music, the indie scene was at a peak since Nirvana went super duper platinum (is that a ranking?) the previous fall with Nevermind. Major labels were doing everything they could to swipe up the next big thing. Some really horrible knockoff bands were popping up on commercial radio during this time. Some things never change.

I was hosting the 6-10AM morning show on Wednesday's at KFJC. The music below feels like I took it straight from one of my playlists from that time. It's possible I did. Granted we weren't allowed, by FCC rules, to play any music with naughty language, so there are a few tracks on here that I would have loved to have played back then, but could not. Count yourself lucky for the advent of internet radio!

Take a walk down memory lane for the next two hours and enjoy 1992 like it never left us.

I Say Fuck: Supersuckers
Spear and Magic Helmet: The Gits
Ghettos of the Mind: Pete Rock and CL Smooth

Youth Against Fascism: Sonic Youth
Officer: The Pharcyde
Murder in the Red Barn: Tom Waits
Always Something: Yo La Tengo

Sandusky: Uncle Tupelo
Your Ass Is Next In Line: The Mummies
Merry Muthafuckin' Xmas: Eazy-E
Have A Cigar: Primus

I used to love seeing the Spit Muffins back in the early 90's. Check them out at Marsugi's back in 1992.