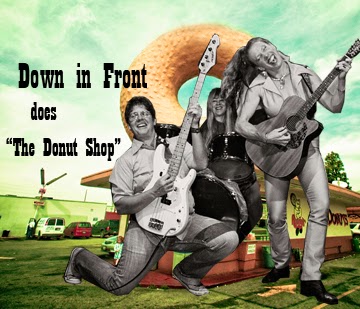 I love hosting local live bands in the studio. They're just so darn eager and flattering. On tonight's show, Julie and Japa of Down in Front are on to talk up their Tahoe Corridor Tour, and their new LP/CD The Donut Shop. I love these two so much, for so many reasons, not the least of which is their musical acumen. But really, their witty repartee is worth the price of admission.

Their raising funds to record their first full-length: Down in Front does the Donut Shop. Check out their Kickstarter page, and please consider throwing them some dough. HA, I said it!

Stream this cheese-whiz into your gullet, here.
Download this tasty custard-filled cruller, here.
Check out all of my shows here, or just scroll down.

Up In Smoke: Cheech and Chong
Since You've Been Gone: James Brown
Two Fools: Francine King

Down in Front perform live!

In Heaven There is no Beer: Polkacide
They Ain't Makin' Jews Like Jesus Anymore: Kinky Friedman
Clothes of the Dead: Bongos, Bass and Bob

New York: Sex Pistols
One of the Boys: Mott the Hoople
Other Stars: Wooden Shjips