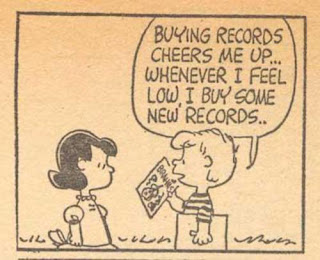 It's good to be back. I haven't taken so many breaks in a good decade. I'm back in the groove after tonight's show.

After such hullabaloo from the Rock Fight 10 show, I needed a much deserved break. Also, I produced and hosted Comic Outpost TV for the SF comic store Comic Outpost, at Comic Con in San Diego. More on that coming soon. What an eyeopener that was.

My show has never been genre-specific. I plays what I wants to. But that's not saying that I can't focus on a specific genre from time to time. I've been collecting music (LPs, CDs, digital) since I was a wee lad, dating back to my first KISS records in the mid 1970s.

I have a rule when I shop for music: if I purchase three things or more, one MUST be from an International artist (reggae, dub, middle-eastern, etc.), one must be Jazz. By doing this I've realy grown a very well-rounded library. Tonight I was in the mood for Jazz. Most of the show is some tasty vinyl treats.

Get into it. Let your mind wander about this one.

Snap your fingers along with the streaming beat, here.
Download this toe tapping menagerie, here.
Listen to all of my cool stylings here, or just scroll down.

Up in Smoke: Cheech and Chong
Interstellar Overdrive: The Melvins

Let's Loot The Supermarket: The Deviants