Should Tookie Receive the Death Penalty? 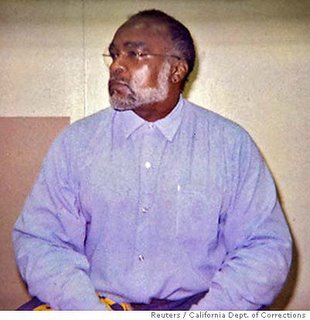 Governor dreading decision on life or death without clemency, Williams' execution is just weeks away
Williams, 51, the co-founder of the Crips gang and a four-time murderer who has become an anti-gang crusader and Nobel Peace Prize nominee, is scheduled to be executed at San Quentin State Prison on Dec. 13. . . .
. . . Prosecutors argue that a man responsible for four shotgun murders who was involved in nearly a dozen violent incidents in his first decade in prison -- before he changed his ways -- deserves the sentence a jury recommended.

Big thanks to Joel Arquillos for this story and the links. Check out his personal bog here.
Posted by John Hell at 9:05 AM