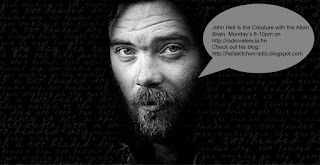 Stream the Evil One HERE!

Download the Creature with the Atom Brain  HERE!
Listen into all my shows here!
Subscribe to my show, via

Well Roky Erickson died. So there's that. Damn. sigh. What a life he led. Have you seen the documentary of his life, "You're Gonna Miss Me"? No? Go see it now.

I was lucky to have seen Roky perform four times since 1993. The first time I saw him was at the Austin City Music Awards, when he was walked out onto the stage to perform. My mouth was agape as he shuffled onto the stage, timidly, only to belt out three songs in perfect pitch. It made me shudder. The last time I saw him was he final performance, at The Chapel in SF, this past April 20th. I wish I could say he went out on top, but it was a sub-par performance by this legend. Still, it was so wonderful to see him up there sharing his love with the audience.

The first hour of this show focuses on a number of new releases. Support new artist releases!!! I offer links to the new artists below.

The second hour is all about Roky. I have some rare and live treats, as well as some excellent cover versions of Roky solo and 13th Floor Elevator tracks.

There's a lot to enjoy here.

You're Dead: Norma Tanega
Reunion: Bobby Gentry
Don't Touch Me There: The Tubes

That Time I Killed My Mom: Cokie the Clown
This Thing: King Gizzard and the Lizard Wizard

You're Gonna Miss Me: The Spades (pre-13th Floor Elevators-Roky)
You Don't Love Me Yet: Bongwater