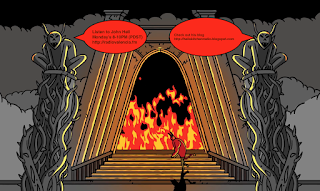 Fucking A Right! Alcohol. God. Devil. Heaven. Hell. Crossroads. Where do you stand? Sometimes when it hits, it hits hard. The music deviner.

There are times when I'll put in some effort to prepare for a show. I'll think about the artists and songs I want to play, and perhaps even the order I want to play them in. Not tonight. Starting with the second set I had an epiphany of sorts. It took us on a journey. Each set flowing into the next. Honestly, I could have kept this up for another few hours, but alas I only have a two hour canvas in which to paint the aural colors to pleasure your ears and your spirit.

And it's all about the spirit on this night. And spirits!

Next Monday I'm considering hosting an all-covers show. Tune in.

God's Been Drinking: Bernadette Seacrest and Her Yes Men
God's Away on Business: Tom Waits
God: John Lennon
Wake Up The Sun: Edward Sharpe and the Magnetic Zeros

If You Want To Sing Out: Cat Stevens
Posted by John Hell at 10:00 PM No comments:

Hell's Kitchen Radio #329: You Are My Shadow 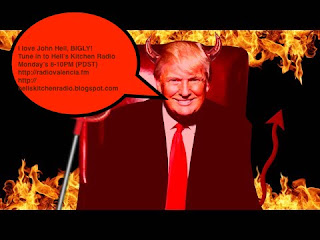 I give away some radio DJ secrets throughout this show. There are also some running themes. And there's some questionable language (you may not want the kids listening to the Ben Folds cover).

I've been meaning to host a covers special for a while now. Perhaps next Monday I will do so. Tune in and find out. I played five covers tonight, if you're keeping score.

There are some posts during the year that jus seem sparse, but I can assure you that this show is not! Tune into Radio Valencia regularly and you'll discover artists you never knew you would love. Seriously, this place is life-altering. Take a chance on us.

Stop Moving To Florida: Melvins
If I Like It I Do It: Jamiriquai

I Love My Wife: Frank Sinatra
Within You Without You: The Beatles
Call For All Demons: Sun Ra

Jet Airliner: Paul Peña
I Got Everything I Need (Almost): Downchild Blues Band
Posted by John Hell at 10:00 PM No comments: