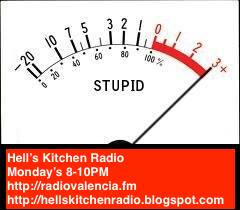 You would think since I'm only getting about four hours a sleep, having a newborn in the house, I wouldn't be up for doing my weekly show. You would be incorrect. What the hell do you know anyway? It's not like I was looking to run out on the little one and my bride. No, no, no. It's more about taking the time away so when I come back I'm even more hot to care for all-things-baby!

It was so great getting back on the horse tonight after three weeks away. The playlist felt fresh, and your comments kept me on edge...er, I mean happier than a baby with a fresh boob in the mouth!

You'll have to forgive me, I have baby-brain right now. That being said, I think you will agree that I can still throw together one hell of a playlist. Oh, I'm thinking about starting a campaign to get a local commercial radio station (107.7 The Bone, KFOG, Live-105) to allow me to program their station for one hour during the evening drive. I promise not to play anything with bad words...in English. Really though, the dreck they are playing is insulting. Give me one hour and I know you're going to have listeners hungry for more.

Until that day, keep tuning in Monday's 8-10PM and I'l give it my best; baby-brain and all.

Vitamin C: Can
Free Your Mind and your Ass Will Follow: Funkadelic