Hell's Kitchen Radio #284: No One Ever Listens

Stream the answer, HERE!
Download the question, HERE!
Listen into all my shows here, or just scroll down

Thanks for tuning in every Monday night at 8. I never mention this on the blog, but it's always fun to chat folks up during my show, so please if you're listening take a second to say hi on the Radio Valencia Chatterbox, or if you're a FB friend, then on there. 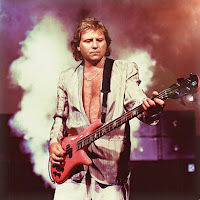 Another show, another tribute. What's up with this friggin' year? I have done more tributes in this single solitary year than in my first 25+ years in radio, combined! Greg Lake of King Crimson and Emerson, Lake and Palmer fame passed from cancer at the age of 69 last weekend. Best known for his days as bassist/vocalist for ELP, he was also a co-founder of the seminal prog-rock band King Crimson, where he performed on the first record and toured for their first two LPs before going on to start ELP alongside the late great Keith Emerson, who died in March of this year, and Carl Palmer who still has a few weeks left before something horrible happens to him. ugh

Much of the first hour is actually down right danceable. There are some seriously funky-ass tracks in here. Do me a favor and get your groove on until it's too late.

The second hour features a dive into my live music vault. And what a vault it is. You know, when I started doing the community radio thing a while back I committed to playing an hour of live music each week. I've sort of slacked off on that one, and for good reason. There are so many great releases I want to play with you week in and week out that the live music thing has had to take a back seat. Well not tonight. Take a look at the second half of the playlist and you can see that it's all over the damn place, and worth every second of your precious time.