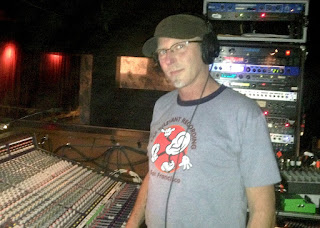 Stream Sound Magic, HERE!
Download Master of the Board, HERE!
Listen into all my shows here, or just scroll down

Ever want to tell the sound guy at a show how to do his job? Sound engineer John Karr guested on September 12th, and you'll have to excuse us both, but when two absolute music geeks get together, there's not much that can stop the conversation. Almost each tune was presented by John with a story to go with it. This guy has a lot to say, and if you enjoy music as much as we do, you're going to eat it up.

John Karr is a well-established sound engineer, having worked clubs for over 30 years, and been the man at the controls in the studio for about the same length of time. If you've been to the Great American Music Hall then you have probably heard his mix. Check out his site here for Ear Relevant Recording, and if you are in a band then you MUST hire this man!

My only regret is how long it took me to get this show up for you to listen to.

I Love Living in the City: Danko Jones
Presence of the Lord: Blind Faith

One Hundred Foot Lemon: The Mermen
Stomachache Due To The Sincere Belief That The Rest of My Band is Trying to Kill Me: Rumah Sakit

Shinjiro (ft. Mos Def): DJ Krush
Stumpy Meets Firecracker in Stencil Forest: Happy the Man
Take Me Out to the Ballgame: The Melvins

In 1995 The Mermen came to Burning Man. I was up front and center. I know the film is grainy (shut up!), but it's totally worth the viewing. Here's part one of two.