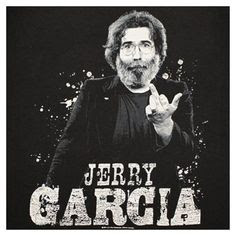 Stream The Magic that is Jerry, HERE!
Download Essential Tunage, HERE!
Listen into all my shows here, or just scroll down

My musical tastes are anything but conventional, and I think that should be the norm. I was raised by a father who loved Chicago blues, and was also around two older sisters who were into the popular rock of the 70s. My first favorite band was KISS, followed by the Beatles a few years later, and then Led Zeppelin. I've written at length about my introduction to the Grateful Dead, and my subsequent love affair with them. My 25+ years in non-commercial radio has introduced me to too many genres to count, and it's just as common to hear me play the Melvins on my show as it is James Brown.

For my most recent show I wanted to pay homage to the musician who made the deepest impact on my musical soul: Jerry Garcia. I don't love every one of his songs, and I cannot stand his voice after 1982. It was the deep spiritual, true American message that most resonates with me. It's because of Jerry's love of American musical history that encouraged me to dig deeper than what was commonly offered up on mainstream radio. I think it's safe to say Jerry Garcia is one of the main reasons I chose a life of left-of-the-dial radio.

Tonight's selection runs from early raw-Dead, to some screaming jams. Take a dive and enjoy the ride.

August 9th is the 21st anniversary of the passing of Jerry Garcia. I wrote the following on my Facebook page earlier today:

I was waking up listening to Ann Arbor on KFJC when I heard that Jerry had passed. Actually I hit the snooze button, but something in her tone that I briefly heard made me turn the radio right back on. Sad doesn't put it quite right. I was full of anguish for the next number of days. I knew it would eventually happen, I just didn't think it would happen so soon. I called my friends Nichole and Zion to see how they were faring. I think it hit us all like a ton of bricks. Zion's mother came to town a few days later and we all went to the Jerry memorial in GG Park. She told us some amazing stories of touring. She told us she had never been to a Grateful Dead concert before and wanted to go to the middle of the crowd, which I know made Zion nervous.About 30 or so minutes into it a tall, lumbering hippy came through the crowd and walked right up to us. He looked at Zion's mother and said in his sprite southern accent "Donna Jean?! Why, I haven't seen you in a coons age." He then looked at Zion, and said "why you're the spittin' image of your old man.", which he is. They spoke for a while and then he (his name is Sunshine) said so long, and walked off. At that moment people around us started to kindly say hello to Donna and show their love. If there was ever a bitter-sweet day, it was that one.
That moment reminded me that even without Jerry physically being present anymore, he doesn't need to be for all of us to still feel his presence and what he and his musical message means to all of us who took the time to listen and embrace it. To mourn his passing, even after 21 years, is to fail to see that as long as we sing his songs, then we still sing his praises.
I don't know what happens to us when we die, but I do know that as long as I live I'll continue to enjoy what Jerry brought to my life, with a smile on my face, the same as when Sunshine saw Donna and Zion as he tripped his way through the fields. Take pleasure in what you have now, and share the love as you go.


There are a few great Grateful Dead-related events happening in San Francisco this weekend. I hope you can make them all.

Sunday, August 14 - 10:30AM - Jerry Garcia Plaque Unveiling
4550 Mission Street at Harrington Street
The first Jerry Garcia plaque is finally being forged, and we're going to have an unveiling celebration the morning of Jerry Day! Join us at the corner of Mission and Harrington Streets, and then we can all head up to Jerry Garcia Amphitheater to celebrate!

I sure hope to see you all at some or all of these upcoming events. Have a grateful week.