My Life With The Grateful Dead Part 3: Road Stories Take 2 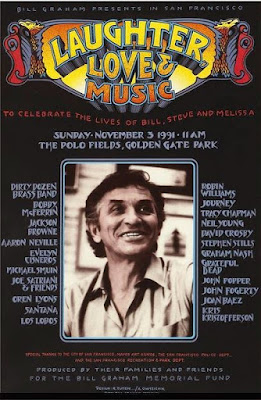 This was the week following the untimely death of rock promoter and all-around "good guy", Bill Graham. If you're a Deadhead, then you know his history with the band. The Grateful Dead had played four amazing shows at the Oakland Coliseum, and I attended each one. The Halloween show alone was absolutely brilliant! They opened the run of shows with Graham's favorite tune: "Sugar Magnolia", and predictably closed out the run, at the free show on 11-03 in GG Park, in front of 100,000+, with "Sunshine Daydream". Fabulous. I'm also curious how many people in the field, who are familiar with the song were wondering where the rest of Sugar Mags was? 1991 was a stellar year for the band. Jerry was in good health, and they were firing on all musical cylinders. They had brought back some classics from the late-60s and early-70s that were out of rotation for many years, and the crowd was always very appreciative. It was fun to see Jerry smile more, showing that he too was enjoying the show.

As was usual for me, I showed up alone, hoping to meet up with some friends. That proved impossible, being that there were over 250,000 people packed into the area. Also, I really wanted to be up front by the stage, but knew that was going to be tricky. Tricky until I saw that the Dirty Dozen Brass Band was going to start off the festivities by performing from the back of a flatbed truck, and driving around the perimeter of the Polo Fields. I predicted they would end up right back in front of the stage at the end of their journey. My plan: follow them and dance my way all the way around to the front. And I succeeded in spades! That was one long conga-line, I can tell you that. By the time they were done, I was exactly where I wanted to be: dead center (no pun intended).

I always had a way to get just exactly where I wanted to be at a show. In my younger years it had to be right up in the front. I wasn't a jerk about it either. If I didn't get there early enough to stake my place at the stage, then I would just dance my way up to where I liked to be. I find that if you dance at a show, then people make space for you. Try it. But you'll have to commit to it the entire show, or you'll lose that ground you won. I used to love dancing my way around the Henry J. Kaiser in the 80s. I went to so many shows there, I felt like I knew every nook and cranny. 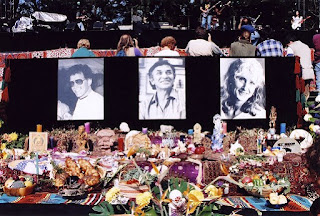 As I got older and more show-experienced I realized that being about 10-20 feet in front of the soundboard (if it's in the middle of the room) is the best place for sound. The sound engineer has an ear for the space, and the lip of the stage is NOT the best place for optimum sound quality. So today, that's where you'll find me. Let the kids have their fun at the stage. I want the best sound for my time and money. 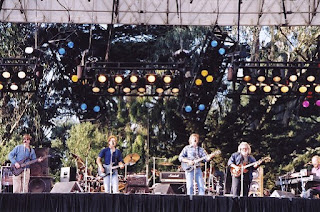 It's kind of interesting to watch the Dead be a backing band. They did that a few times during their 30 year career. I saw the Dylan and Dead show in Oakland, in 1987. Dylan looked tired, but the boys picked him up and pretty much carried him during his set. I love the story of the Dead backing Dylan and Mickey's old girlfriend, Joan Baez. Jerry couldn't stand it, and refused to come out for the encore during the 12-12-81 show, where they were backing her for a set. She called them her boys. Jerry hated that. The show is cringe-worthy.

Seeing the Dead in Golden Gate Park, down the street from where they used to live, made it feel what it may have been like back in the mid-60s, with so many happy people coming out just to enjoy a special day in the sun. I like to jump while I dance, and in my 20s I was able to jump very high at times. Because of my location in front of the stage, a photographer caught me jumping above the crowd, snapped the pic, and it ended up, in color, the following day on the front page of the San Jose Mercury News! Regardless of what people tell you, I am jumping in the air. No one was sitting at this event. And I was NOT jumping like that to Los Lobos, as the caption would lead you to believe. Los Lobos were great, but not that great. 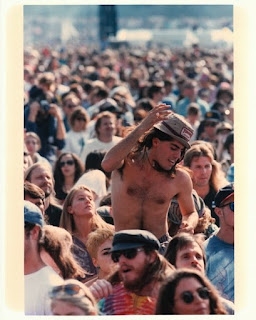 My mother was kind enough to contact the paper about the pic, and they sent her a hard copy. About 18 months later, I was interested in getting into the film industry, because, you know, the radio industry hadn't screwed me enough, that I had to be more of a glutton for punishment. Anyway, I went to the South Bay to a casting agency, to talk to them about being an extra in The Doors film, with Val Kilmer (another story for another time, which includes a group of us singing the Brady Bunch theme with the stars of the film). They asked me to bring head shots. I didn't have any, so I brought pics of me, including this one from the newspaper. I met with the casting agent, who took one look at the pic, grabbed me by the arm, walked briskly outside of his office, swung me around, and low and behold there I was on his wall staring me back in the face! He had that pic on his wall since the show, and asked everyone he knew in the business to look for me. Looks like I found him. I was just shy of 23, and needing to get back into school. I didn't have the money to go to acting school, nor the desire. He wanted me to purchase a beeper and get a job waiting tables so I could be on call. Uh, no. That was a fun few months though, as he took me to quite a few Bay Area film parties, and made me an extra in a few films. Glad I took the chance to dance my way around the Polo Fields that day. I guess I have Bill Graham to thank for that. Thanks Uncle Bobo. RIP.

Here's the video of the entire Grateful Dead set for you to enjoy. Dontcha just love modern technology?