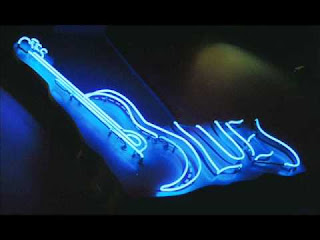 
Sometime during the week leading up to my show, I must have heard some seriously good Blues playing. Maybe. It's hard to say. Maybe I was realizing that I just don't play enough blues, and was feeling guilty, like I wasn't including one of my beloved children in the fun? It's not like little Bluesy did anything wrong. On the contrary, where would I be today without Blues? It was Blues that taught me how to get over heartbreak. It was Blues that showed me that it was OK to be alone. It was Blues that allowed me to heal, following all my many dark and lonely nights.

Maybe I had too much Blues in my life? Perhaps I needed a break, to recognize just how much I love the Blues? Tonight is full of the Blues. And that's a good thing. Blues can also bring you up. Once you hear a line like "I've been down so long, it looks like up to me", and you know that the singer has it so much harder than you, then you know that you're life just isn't that bad. It's similar to watching a Soap Opera. Their lives are much, much worse than yours.

In the second hour I have brand new music from FUZZ and WAND (who are playing Thursday night at Brick and Mortar, btw!!!)!!!!! Are you KIDDING ME?!?!?!?

Damn, that's a lot to be grateful for.

This Friday I'm hosting the live Ask Dr. Hal at XOXO in Jack London Square from 10-midnight. It's only $5 and it's totally worth your spooky-weekend time. 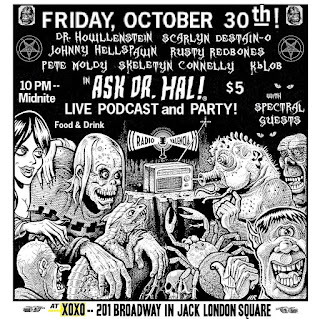 Enjoy this full performance from the original Iggy and the Stooges with Mike Watt on bass, from Detroit, Michigan in 2003. What a brilliant performance.