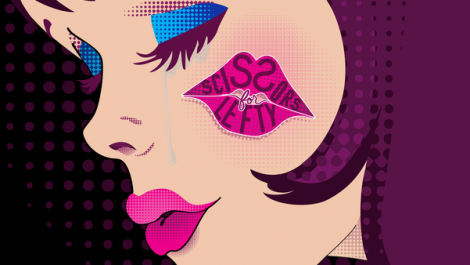 Stream these future stars Hell's Kitchen debut, HERE!
Download the in-studio performance and more, HERE!
Listen into all my shows here, or just scroll down
Subscribe to my show, via

If you know me, then you know how much I absolutely LOVE supporting local bands. I've interviewed countless artists over the years, and their stories are too much fun. Monday night I was lucky enough to have two members of local indie scene-sters,  Scissors for Lefty with me. Bryan and Eric proved to be super friendly, and ready to talk about SfL's roller coaster ride of the past few years. This band is no flash in the pan. They've been supporting act for some heavyweights, including Panic at the Disco, The Sea and Cake, Yeah Yeah Yeahs, Gang of Four, and Blonde Redhead.

Their third release, Bangs and Lashes, came out last October, following a successful Kickstarter campaign, and it was worth the wait. This record kicks the pop-indie-dance-jump-around-groove right from the start. Bryan and Eric performed a few songs in the studio for us, and told some great road stories, as well as how they are surviving the post-record label world. I love Bryan's voice. It reminds me a bit of a young Brian Ferry. There's a shoegazer sound to them that really gets my toes a-tappin'. I think you'll agree. It was so much fun having them perform in the studio, I can only imagine what they do live. Go see this band before they hit it HUGE. And they are going to hit it HUGE.

Scissors for Lefty are supporting Fritz Montana at the Great American Music Hall this Friday night. Tickets are still available. Go out and support live, local music. You can thank me later.

You can see by the playlist below that Monday night had a pretty sweet mix. Take a listen, and feel free to comment.

This coming Monday I'll be interviewing local band Girls and Boys in the first hour. Tune in.

Circles: Ty Segall
River of Fever: The Flesh Eaters
It's Shoved: The Melvins
Youth of America (Alt Take): The Wipers