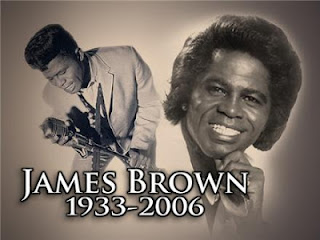 Today is the 7th annual Doin' It To Death, James Brown Birthday Extravaganza, at KFJC.

I spent nine amazing years at the Wave of the West, KFJC. For four years I hosted the Friday, mid-day Jazz/Soul/Funk show, where I would play a halh-hour of James Brown at noon. I called it the "Brown Bag Lunch". Damn that was fun!

After James died on Christmas 2006, it just made sense that KFJC did an annual birthday celebration for him. Considering his birthday is May 3rd, and KFJC hosts the Month of Mayhem every May, where DJs host specials all month long, it was the perfect opportunity to show love for the Godfather of Soul.

Every year I host the prime time slot. Although I love the classics, and my favorite era was 68-75, I also love to play live, mashups, remixes, and covers too. I've also found some other ditties that I know you're going to love.

You can check out each our of my set by clicking on the links below. It's only up on the KFJC site for the next week and a half, so get to it. I believe you can download all of it, so you can enjoy JB everywhere you go.

Check out all of the Month of Mayhem specials on KFJC.

Sex Machine Turns Me On: James Brown vs. Edwin R Starr
James Brown: Nancy Dupree
No One Here But Us Chickens: James Brown

Think (About it): Lyn Collins
Let it be Me: Vickie Anderson & James Brown
You Got to Have a Job: Bobby Byrd
Lickin' Stick, Lickin' Stick: Willie Dickson & The Playboys