A Season in Hell #108: The Return of Altered Barbie 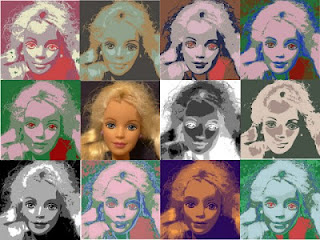 WOW!!! What a night. The Giants win the pennant and I've got Julie Anderson, curator of Altered Barbie in the studio, again!

On to the show. It's time for the 10th annual Altered Barbie Exhibition, opening this Wednesday, October 24th at 50 Shotwell, in San Francisco. The opening night reception, which promises to be fabulous is this Friday night. Curator Julie Anderson brought in some performers tonight, including GregAngelo (that's how he spells it), Cyclub and Ethel Merman. See links below for these fabulous folks.

I've enjoyed this show so much over the years. You really do have to go check out a certain San Francisco event. Even if you hate Barbie you'll love this show. It's "Altered Barbie", so you know it's going to be really fucked up. Good stuff. Tell them John Hell sent you.

As for the music tonight, after the guests left everything was on vinyl. I really have to thank my friend Kaylynn, who donated about 150 LPs to me and Radio Valencia. Everything I played tonight came from that collection. Lot's of 80s/90s indie, punk, metal, goth. All around goodness.

The rain has slowed down, and the crowds are now out of their cars celebrating in the streets, as I write this. It's going to be a long and crazy night in the Mission. I think I'll join them. This is just too good to pass up. Don't you wish you lived in the greatest city in the world, too?

Do It: Rollins Band
Thank God For Sinners: Ty Segall

To Defy the Laws of Tradition: Primus

Hit the Road Jack: The Residents

Interview with The Ethel Merman Experience!

Bring Me The Head of the Preacherman: Siouxie and the Banchees
The Wizard: Black Sabbath
Jerkin Crocus: Mott the Hoople

Lexicon Devil: The Germs
Beyond and Back: X
Marie Marie: The Blasters
Something's Gotta Give: Pere Ubu

Fairweather Friend: John Cale
This is Not a Love Song: PIL
Posted by John Hell at 6:44 PM