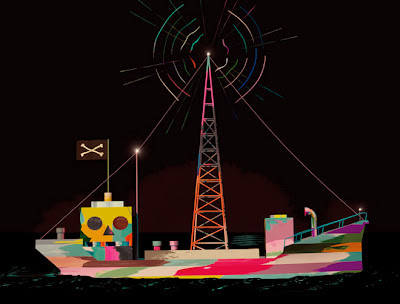 OK, so I was recently interviewed in Wired Magazine about Radio Valencia. Click here to read it.

I remember first seeing Wired Magazine back in the 90s. I knew then that this was a pretty cool magazine. The only problem was, I'm not a big teckie...tecky...techie? I can't even spell it correctly. Anyway, I didn't read it for long, only because I'm a user of technology, but not a creator of it. I should have given it more attention. I think I was written up in it back in the mid-90s when I was co-founder and Program Director of Radio Free Burning Man. I can't remember. They did do a feature story on Burning Man; that I do recall.

Our little community radio station, Radio Valencia, has been making some serious in-roads with the local music scene since we started in August 2010. It came as little surprise (though I was very flattered and thrilled) when Wired contributor Rick Paulas emailed me asking for an interview regarding the current state of radio, and the importance of pirate radio in a landscape where if the megacorps haven't bought up every frequency in sight, then the kids are just downloading music instead (legally or otherwise).

My response in the article is only a snippet of what I told him.

I've been in radio since my start at the College of San Mateo in 1988, where I took broadcasting classes and did board op at all Jazz KCSM 91.1FM. Though I was truly excited about my first chance to be on the air (something I've wanted to do since I was five years old, listening to AOR stations in Toledo, Ohio) I knew that as much as I like Jazz, I wanted to be a rock and roll DJ, hosting a morning show, where I get to choose the music and talk about what I the things that interest me. I quickly made the jump to the all-wonderful KFJC, where I hosted shows from 1988-1997. It was, to me, the greatest radio station west of East Rutherford, New Jersey.

To read more of my radio history, go here.

The reason I bring up my history is to tell a tale of one persons' desire to make it in the radio big time, just to realize what a horrible world commercial radio really is. After the Telecommunications Act of 1996 radio corporations began to buy up all the stations in the major markets. Thanks Bill Clinton. After a few years companies like Clear Channel and Viacom controlled the major commercial stations, and began to consolidate staff and programming decisions. No longer does a local station actually program locally. It's done out of an office nowhere near the station. They analyze data to see what music they can play that will bring in a large enough audience to support their sponsors.

The real nail in the coffin to local commercial was when Clear Channel-owned KMEL ended it's great locally-programmed show "Street Soldiers". This was a weekly show that brought in many community leaders, and students to talk about the struggles in the cities, and what they are doing to make a difference. Fear Channel felt this show wasn't conducive to big profits and canned it. They did bring it back, but only after a loud outcry from the community. See, the power of the people can't stop!

The homogenization of the radio landscape was complete.

While hosting a four-hour weekly morning show at KFJC I concurrently spent a year working the Sunday morning shift at KLLC-Alice 97.3FM in SF as a board operator (read: button monkey). My job was to play the music on the approved program list. It even told me the order to play it in and which commercials to play. No surprises there. I was also to play the pre-recorded Sunday morning public affairs show from 6-7AM. The host would interview people from your typical public affairs-type categories: authors, scientists, inventors, etc. But there was nothing controversial about the people at all. Also, since it was pre-recorded there were no phone calls from listeners with questions. Often times listeners would call the studio with a question, or to tell me how lame the interview was, and I would have to tell them that it wasn't live. I wasn't disappointed when they laid me off, because the woman I was filling in for was coming back from maternity leave, WHICH they never told me about in the first place. I knew I should have thrown an f-bomb in there. Oh but wait, they never let me talk on the air, even though I was already hosting shows at KFJC for years. That makes sense.

I had to thank Julie the program director, whom I helped train at KFJC, btw, for letting me go. Really. I told her that after a lifetime of dreaming of being a huge rock and roll DJ, and even hosting morning radio shows at KFJC before my tenure at Alice, I knew for a fact that there was no way in hell I would ever stoop so low as to want to host a radio show on a station that cares more for where the commercials are placed, and not at all for their listeners. What a joke they were. The music is selected to please the lowest common denominator. It's insulting.

Radio is an art form. Radio is about connecting your listener to the music your playing, the person your interviewing, the event your announcing. Radio should be an immediate experience. Radio is about taking risks. So many times I've gone into the studio with arms full of LPs, CDs, MP3s, not really knowing the order of music I'll be playing, but knowing that my pallet is full of many different colors. Two hours later I come out with an aural display that is unlike anything you could ever consider hearing on any commercial station in the nation. I'm proud of that.

Every show on Radio Valencia is AMAZING! I mean that. I love listening to a station where I may know the style of music or public affairs the host prefers, but I still don't know how they're going to present it. I may not like every song in their set, but I'll stick around knowing that I'll like most, and I'll support their show by going out and buying the music they play, or seeing the band live, or buying the book, or seeing the small-budget film.

The media has a responsibility to support the local community. How do the big corporate radio giants do this? Oh, they'll tell you about the money they give, and the events they table, but these are rarely ever for truly local events. It's usually for other local big corporate events. "Clear Channel supports Bank of America Kids Day at the park" or something like that.

Our mission is to play the best music we can find, from local and /or indie bands of all genres, interview people from all walks of life, support local events by announcing it on the air, and hopefully be in attendance. Our vision is to be the most-listened to, most depended upon radio station in SF five years from now. I don't know how that couldn't happen.

Take a risk on media that supports its local community.
Posted by John Hell at 4:43 PM